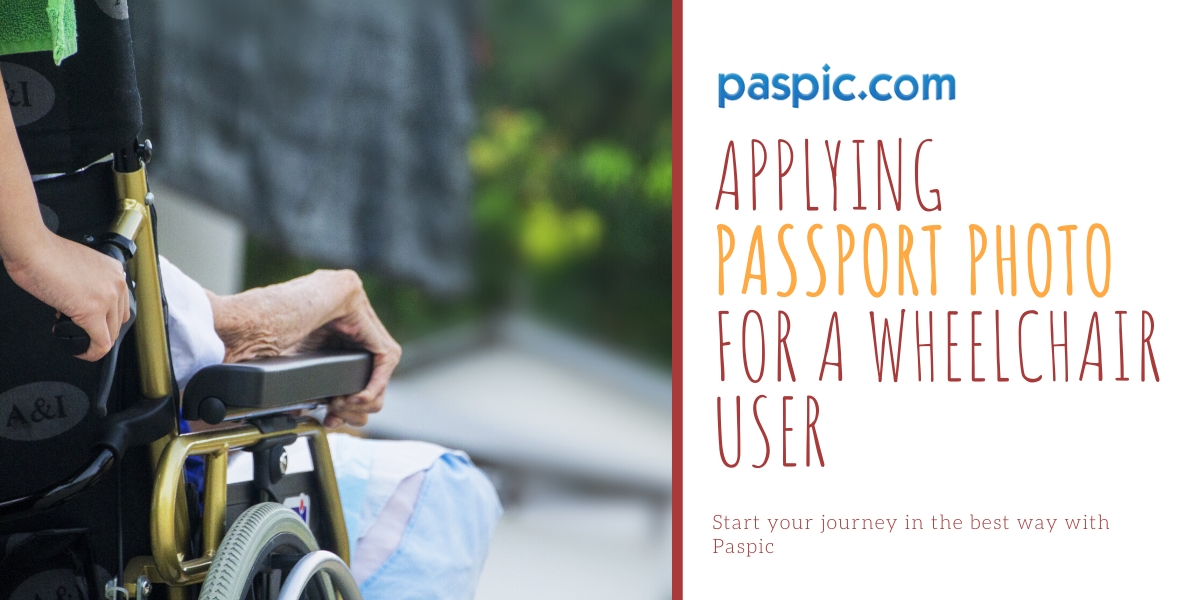 Travelling abroad with a wheelchair can be challenging. If you or a family member uses a chair either all or most of the time, travel planning can be a complex and time-consuming thing. It doesn’t just start when you are thinking about where to go: passport photo booths are not designed with wheelchair users in mind.

Some photographic shops and retailers do offer in-house passport photography, but if the wheelchair user has complex disabilities, it can be difficult to find an outlet where staff have been trained in how to communicate or interact appropriately.

Passport forms do have space to provide details of disabilities which can affect photo standards, but taking a photo in the home environment that is familiar and comfortable can get the best results.

Wheelchairs with headrests do present an issue, particularly if they protrude past a person’s head. Most headrests are black in colour and this does not sit well with passport photo requirements.

We had a great tip from the parent of a disabled child who already had two sets of photos rejected because of her child’s headrest. Her solution was that in order to reduce background colour, whilst still enabling her child to maintain a good head position, she made sure her child was sat close to a plain coloured wall and affixed a white tablecloth to the wall with tape. She then tucked the edge of it down behind her child’s head, covering the headrest, and consequently snapped the passport photo she needed. As the best passport photos are taken when the camera is 1.5m away from the subject, this meant that the edges of the tablecloth and the wonky tape across the wall didn’t show and the photo was accepted.

The other factors which produce the best passport photos still applied and were easier to achieve. These are:

We all hope our passport photo will turn out well, and by using a service such as Paspic, we give ourselves the best chance. But if there was one person you hoped you didn’t bear a resemblance to when your photo was ready, who would it be? A popular answer to that question would surely be the former German dictator, Adolf Hitler, responsible for some of the most heinous crimes ever committed.

But that was the misfortune that befell Manchester man Stuart Boyd, who was left “distraught” when he received his passport photo, which somehow had made him a dead ringer for the hated warmonger.

As is often the case in the modern age, the photo spread like wildfire across social media after Mr Boyd posted it on his Facebook, perhaps hoping for some sympathy from his friends.

He told the media: “I wasn’t really sure of the process of how to change it so I posted a picture of it on Facebook. I was really angry when I saw it. I was distraught, really. I just thought, ‘Oh, for God’s sake, I have to have this for ten years and they can’t even get it right.'”

His Facebook friends were the first to start poking fun at poor Mr Boyd, who had renewed his passport in preparation for a trip to the Greek island of Rhodes with friends and family.

Among the wittiest comments on display were: “What’s the problem? It looks al-Reich to me” and “That is Heil-arious!”

The Passport Office took partial responsibility for the calamity, and has promised to send Mr Boyd a new passport if he sends the travel document back to them.

A spokesperson for the Passport Office commented: “All UK passports are carefully created and checked to exacting standards before they are issued. We will be contacting him to investigate this case further.”

Customers anxious to receive the perfect passport photo can rely on Paspic’s online service to provide products of outstanding quality, with 99.5% of all our passport photos being approved on their first submission.

If you live anywhere in East Asia, the chances are you have heard of Song Joong Ki, who has turned himself into a megastar thanks to his performances in the hit TV show, The Running Man, as well as the recent drama Descendants of the Sun.

The Korean, a part time model in addition to his acting duties, caused mass hysteria with his recent tour of China, and not only for his renowned charm and good looks.

To complicate matters on his trip, Song Joong Ki had his identity compromised when a photo of his passport was taken and circulated on the internet. It remains a mystery how when passing through customs, an unknown individual managed to get the snap of the travel document, but many are speculating that a customs officer took the picture of his passport in secret. All the details such as his name, passport photo and passport number were visible in the photo that was originally posted online.

It is not the kind of problem you need when you are as big a celebrity as Song Joong Ki, especially with all the other media-led frenzies revolving around him on an almost daily basis.

An obsessed fan uploaded an illegal marriage certificate that appeared to claim she had got hitched to Song Joong Ki, who is used to fending off the attentions of ladies, but surely not to this degree!

Another potential embarrassment came when Song Joong Ki was asked about whether he would be happy if his best friend, Lee Kwang-soo, dated his younger sister. Song Joong Ki shot down the suggestion, explaining that Lee Kwang-soo is too tall, and too old, to be a suitable match for his sibling.

Song Joong Ki’s fan tour of China took him through Guangzhou, Hong Kong, Shanghai, Chengdu and Taipei. He is known as an endorser of many brands in the region, including Domino’s Pizza, Top Ten, Baskin-Robbins and Jeju Air. Song Joong Ki gained notoriety through his bicycle tour of Sydney, Australia, which was covered on the offshoot website of the famous fashion magazine Elle.