Getting a passport for your baby is not a difficult process and generally takes on the form of an ordinary application for a first passport. The time frame, depending on how much you are willing to pay, can be as little as a week from applying for the passport to receiving the physical piece in the post. It is important that, when you’re applying for a baby’s passport, you leave enough time for the application to be processed and the passport to be printed and sent to you.

If the baby is a citizen of the United Kingdom and both parents hold passports for the UK, then applying for their passport is a relatively simple process. Things become more complex if one of the parents does not have a UK passport and the process can take slightly longer as you may need to provide extra documentation to the UK Passport Office.

Only certain people can apply for a baby’s passport. These include a parent or guardian of the child, someone who has legally ‘adopted responsibility’ of the child, and all must be a citizen of the United Kingdom or a naturalised citizen. Some people also have automatic parental responsibility for the child, including the baby’s mother and a father if they were present on the birth certificate or married to the mother, have adopted the child or were married to the child’s mother when the baby was born.

When applying, you’ll need to provide documentation to prove the baby’s citizenship. This is usually in the form of the birth or adoption certificate or a notice of naturalisation. Photos will also need to be countersigned by someone who knows the parent and child well and can verify the identity of both. The photographs of the baby must be behind a white background with no parent or toy in the photo. Children under six do not have to be looking directly into the camera and children under one do not have to have their eyes open. Read our tips, How to take baby passport photo.

For a cost of £46.00, the passport will be sent by standard mail, which can take between 4 and 6 weeks. For £87.00, you have a fast-track service which will deliver the passport within one week.

Can you smile in a passport photo? 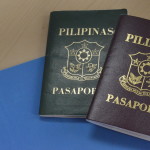 Where to take digital passport photos